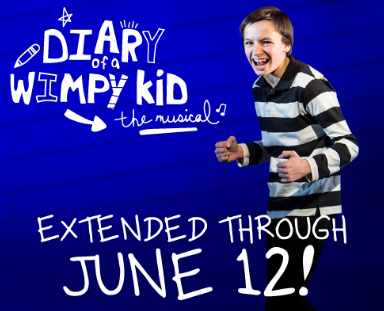 First of all, let me just say that my 7-year-old nephew is a HARSH critic when it comes to the stage. Since he was about 3 we have been taking him to theater productions and he has no qualms about expressing his feelings about a performance. Unfortunately, that is sometimes DURING the performance in the form of his repeated whispers asking if we can leave.

There were no whispered pleas during Diary of a Wimpy Kid the Musical at Children’s Theatre Company. In fact, he LOVED it!! He is already a fan of the book series and seeing it come to life on stage was a treat. Obviously he isn’t the only one who feels that way because the Children’s Theatre Company just announced that it is extending the run of Diary of a Wimpy Kid the Musical through June 12!

Greg Heffley is in survival mode. All. The. Time. From bullies to his big brother to his height-challenged stature, he’s the wimpy kid we can all relate to. The beloved series hits the stage in a brand-new musical with Rowley, Manny, and of course, Rodrick joining in the mayhem. A ridiculous amount of fun for anyone who has survived, is surviving, or hopes to survive middle school, inspired by the award-winning and bestselling book series.

Tickets:
The Ticket Office is accessible by phone two hours prior to most performances. These posted hours are subject to change.
Email: tickets@childrenstheatre.org (inquiries only, no ticket processing)
Phone: 612.874.0400
Website: childrenstheatre.org
Lap passes available for children newborn to age 3
ASL/Audio-Described performance: May 20 at 7pm
ASL performance: May 22 at 5pm
Single tickets range from $15-80
Group tickets up to 25% off regular tickets for groups of ten or more