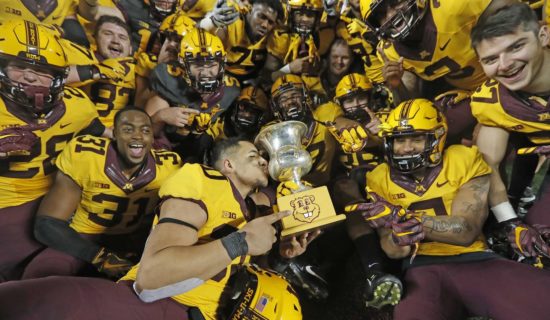 Football in spring? Yes, indeed! Join the Golden Gopher Football team this Saturday, April 30 at Huntington Bank Stadium for the 2022 Spring Game starting at 1 pm. All events are free.

Update: It’s a bummer this won’t be happening. The game will still be played at the team’s indoor football facility at Athletes Village due to forecasted weather and won’t be open to the public.

Also, all the planned activities have been canceled. BUT, Coach Fleck has said there will be a fan-friendly event during training camp this fall where the public can interact with coaches, staff and players. They will also hold its annual oar collection and diaper drive at this event in the fall.

Fans are encouraged to bring a decorated oar to the spring game. These customized oars will be added to the inside of Huntington Bank Stadium where they adorn the hallway that the Gophers travel from their locker room to the field on game days. These inspirational oars are the final images the Gophers see before taking the field and serve as a way to connect the community and state with Gopher football.

The team will once again be hosting its annual diaper drive. Gopher fans have donated more than 100,000 diapers in the last five years and fans are once again encouraged to bring diapers to the game and drop them off outside the stadium near Tribal Nations Plaza (outside of West Plaza). These diapers will then be donated to the Diaper Bank of Minnesota where they will then be distributed to families in need.

They haven’t posted the pre- or post-game activities yet, but hopefully they’ll have some fun things for fans to do in addition to watching the game live and in-person.